From MotoHawk
Jump to: navigation, search 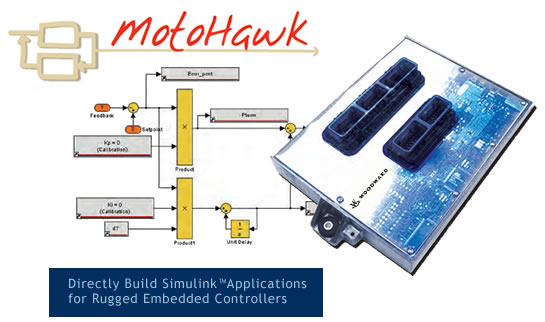 MotoHawk is a powerful development and prototyping system for Simulink/Stateflow users. Control models prototyped with MotoHawk move seamlessly from development into production.

Benefits of Model Based Design

Go from concept to production with less time and less cost.

Simulink® is a trademark of The MathWorks, Inc.

MotoHawk is a critical component in a model-based software design process.

Application developers work directly in the Simulink environment with a one step (CNTL-B) build that goes from application model to flash on Woodward Production Hardware.

MotoHawk's Role in Model Based Design

MotoHawk is a Toolbox to Simulink and is the glue that connects the Model Based Developer with the Woodward MotoHawk Control Core enabled Hardware. 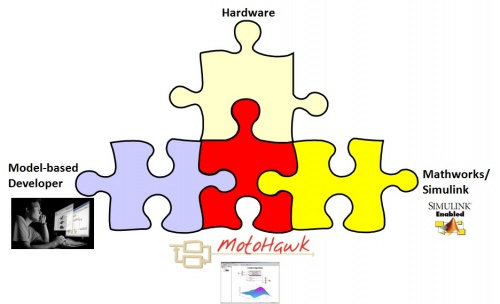 MotoHawk can be downloaded from the Software Search of Woodward.com. Just type MotoHawk in the search box.

MotoHawk is licensed by a silver USB dongle that is placed in the USB port of the computer. All new MotoHawk purchases come with a dongle licensed for 2008a - Current Service Pack Release + 1.

MotoHawk maintanance can be purchased later to then add additional MotoHawk licensed versions to the dongle.

You can find descriptions for each block in the MotoHawk library below, or by searching by block name. See: MotoHawk Blockset Help


What is Required to Use MotoHawk?

MotoTune is used to Program the ECU, and for Calibration. Industry Standard tools that use CCP or XCP may also be used for calibration.
Another Woodward software package used for monitoring of parameters is the Toolkit HMI Software. ToolKit can program a subset of the modules.

MotoHawk 5xx and 55xx can use an open source GCC compiler or Greenhills compiler.

The S12 modules use Codewarrior by Freescale.

The GCC Compilers can be downloaded from the Software Search of Woodward.com. Type GCC in the searchbox and leave other parameters as the default.

Codewarrior compilers must be purchased from NXP.

In addition to the extensive MotoHawk library, users can optionally purchase specialized blocksets to add additional power to the application design. Additional blocksets include:

A MotoHawk Development kit is available for users who are getting started. This contains the the MotoHawk & MotoTune software and licenses, plus all of the cables/harnesses required to get started with MotoHawk. 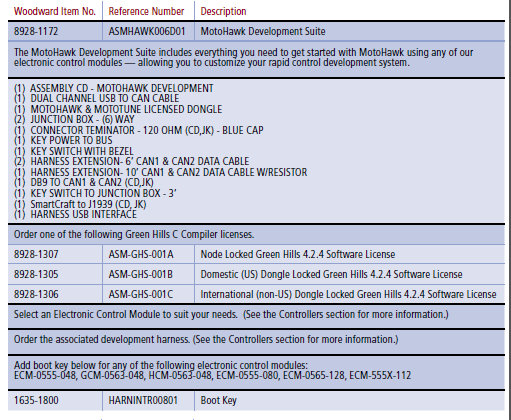 Beginning with MotoHawk 2009b, alpha level support for GCC is included in MotoHawk. GCC is considered Alpha level in 2009b and 2010a, and Beta forward.

As a developer of MotoHawk, these are the fundamental rules that must be obeyed. It is a mission statement of sorts that drives the high quality, flexibility and consistency of MotoHawk. It also illustrates the direction of our technology as we strive to improve our tool.

All input/output ports are integer types

With many different module types and interfaces, it is possible to have modules that do not support floating point. Therefore all edges to the OS must have integer types.

All blocks are as complicated as they need to be

Due the variation in applications developed by MotoHawk, developers want to use different behaviors in vastly different ways. Therefore, blocks that over-complicate a basic behavior are not desired.

Woodward's build process uses Mathworks Embedded Coder, a full featured production intent coder. The MotoHawk build process also features MotoCoder Technology - which optimizes the build for memory use (less Flash and less RAM used per build) using Optimized Driver Inclusion. If an output is not used, it is not included in the build. MotoCoder technology also allows ports to new hardware to occur very rapidly via software re-use, and behavior added for one module is often easily applied to another module.

64-Bit MATLAB is supported in MotoHawk 2010b and Higher.

Windows 8 is supported starting with MotoHawk 2013b SP0.

Here's a list of all the Wiki articles about MotoHawk.